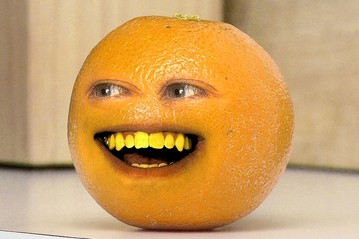 Four-year-olds don’t really have archnemeses. I guess I was just precocious. There was definitely some evil glowering and plotting. And like most archrivalries, it all began with a misunderstanding. But, let’s not make this more than it was.

My first archnemesis was an orange.

Perhaps it’s more accurate to say that my first archnemesis was uncertainty that happened to take the form of an orange. The citrus fruit sat in front of me on a table, waiting patiently to be deskinned and consumed. And I had no idea what to do. This orange was presented to me as a substitute lunch after some unknown misfortune befell my actual lunch. My lovely and well-meaning teacher handed me this orange – and without further input, left me there. I panicked. I had NO IDEA what to do. I couldn’t fathom how to transform the impenetrable ball in front of me into a tasty snack.

It’s not that I’d never eaten an orange before, but in my entire four-year existence, never once had I faced a whole, intact orange. Until that point, they came in comfortable, consumable wedges. There was none of this faff about rinds or that weird white webbing interlacing the snacky bites inside. So I did what any reasonable human would: I insisted I didn’t like oranges and handed it back.

I continued to insist that I didn’t like oranges for the next twenty years. True animus requires commitment. So I was entirely prepared when 24 years later another fruity enigma crossed my desk.

“It’s kumquat season!” is a sentence I never imagined would be relevant to me. But there it was, marching across the office to strike fear into my heart. My lovely and well-meaning coworker held out an orange grape-looking thing in a gesture of generosity. I quickly rebutted “Oh, kumquats! Delicious!” Now, let’s be clear: I still wasn’t sure what the difference was between kumquats and Farquadd. Theoretically, it seemed one of them was edible. What I did know was after 24 years, I was finally old enough to try citrus fruit. Instead of digging in my heels and passing up my best chance to eat a kumquat, I accepted it enthusiastically and immediately googled it.

The advice online for the kumquat novice was infinitesimally detailed, thoroughly documented, and entirely overwhelming. If you came here looking for an answer, you eat the kumquat whole.

Upon reflecting on these mirrored incidents, I couldn’t help but ponder the choices I made in each. I so clearly see the entrenched, cocksure little girl and the early career professional keenly aware of her standing. The girl not wanting to be weak or ignorant. The woman trying not to be inexperienced or unsophisticated. The girl growing to accept risks and gain a willingness to dive into the unknown. But again, perhaps I’m making too much of citrus.

No matter how deep or shallow I dig, I now know the 14 steps to eat a kumquat:

Whether or not a kumquat is even a citrus fruit is a whole different matter.